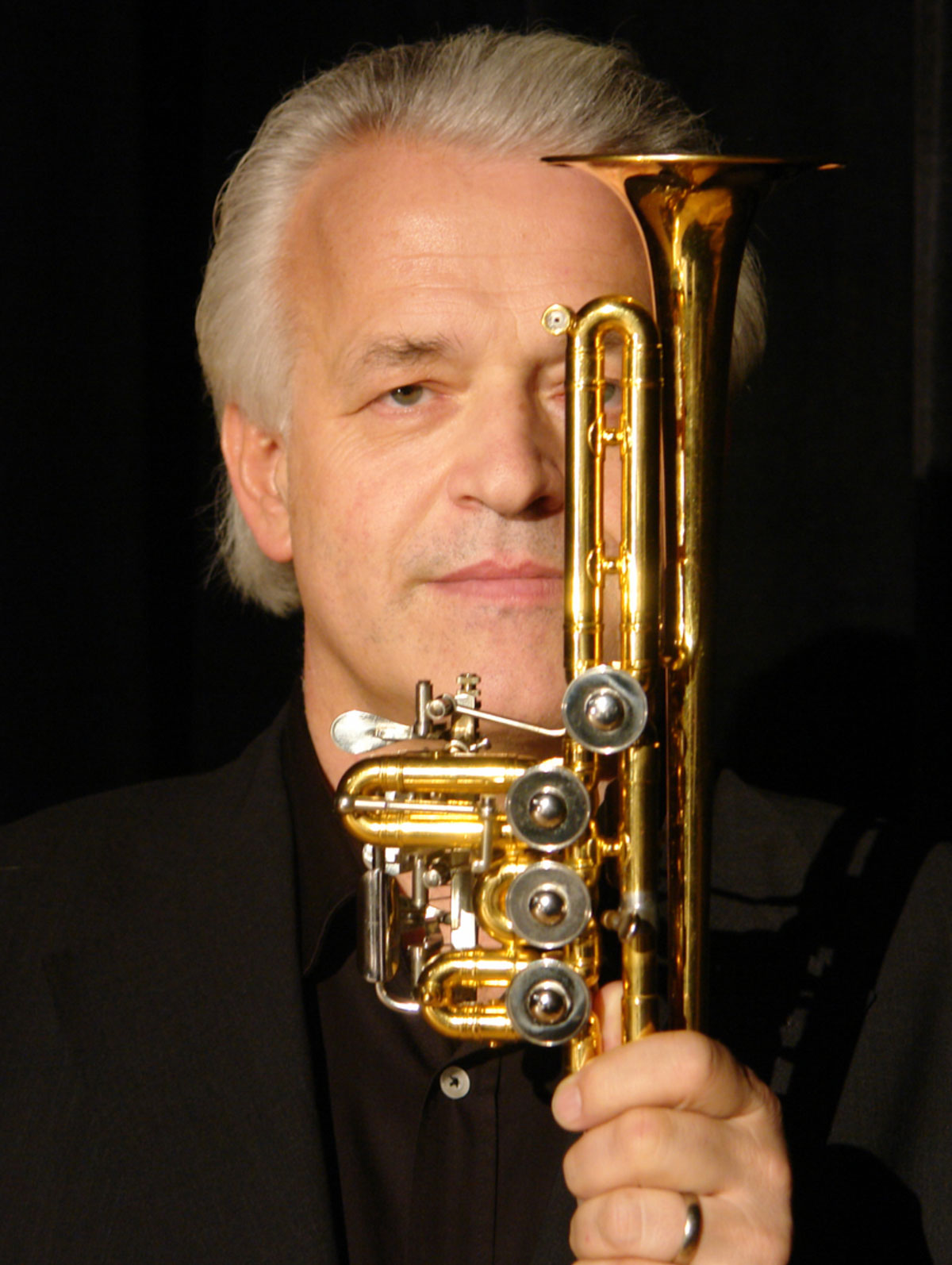 Otto Sauter is well-known as one of the world‘s leading trumpet soloists. As a specialist on the piccolo trumpet, the German musician has already appeared in all major concert halls.

Otto Sauter‘s musical talent was encouraged at an early age: born on the shores of Lake Constance, he was given his first trumpet lessons when he was only 4 years old. At the age of 16 he continued his musical training with Claude Rippas at the Winterthur Conservatoire, where he received his teaching and orchestral diploma in 1984 and his soloist diploma one year later. After graduating, Otto Sauter pursued further studies with Bo Nilsson in Sweden and Pierre Thibaud in Paris.

From 1988 until 1998 he was appointed principal trumpet in the Bremen State Philharmonic Orchestra. In this north German City, he devoted a lot of energy to furthering the careers of young artists. Since 1991 he has been artistic director of the annual Bremen International Trumpet Festival, which is one of the world‘s leading events for brass players. In 1994 Otto Sauter founded the Bremen Trumpet Academy, which under his guiding hand offered the most gifted young trumpet players from all over the world a unique training programme.

Sauter also does a good deal of teaching at international colleges, like the Bremen Academy of Arts, the Toho Gakuen School for Music in Tokyo and the Universidad Metropolitana de Santiago de Chile.

Otto Sauter is one of the most sought-after soloists on the piccolo trumpet. In December 1995 he played with the Philharmonia Orchestra of London in the presence of HRH Prince Charles at St. James‘s Palace. 1998 saw him giving a guest performance at the Vatican as part of a concert to mark the foundation of the ‚German Society for the Restoration of the Vatican Art Treasures‘. In August 2000 he played in St. Peter‘s Square for Pope John Paul II. and 50.000 visitors together with the Philharmonia Hungarica during the Festa Musica Pro Mundo VNO. Since spring 2001 he plays regularly with his own cycle of spiritual music „Elevazione Spirituale“ at the Vatican. In April 2001 Otto Sauter played together with the China National Symphony Orchestra conducted by Muhai Tang in the Forbidden City in Beijing.

When UNICEF-Germany celebrated its 50th anniversary, Otto Sauter decided to initiate and give a series of concerts in the most beautiful and important churches all over Germany. He also played the opening gala-concert of the „Schafhof-Festival“ for UNICEF of Ann-Kathrin Linsenhoff, the former World Champion in dressage and winner of the Olympic Gold Medal, in cooperation with the Hesschische Rundfunk Frankfurt.

Each year he invites renowned international artists like Montserrat Caballé or Bobby McFerrin, to give a joint concert for the „Otto Sauter Foundation“, at the Classic-Open Air of the „Hohentwiel-Festival“ on the shores of Lake Constance.

With EMI Classics, he started his CD series of world premiere recordings „World of Baroque“, with concerts from his music collection containing about 600 rediscovered compositions of baroque and early classical masters like A. Scarlatti, G. Reutter or J. M. Molter, that were not peformed for 250 years.

Besides the baroque repertory, Otto Sauter dedicated himself to the enlargement of contemporary original literature for piccolo trumpet. He commissioned works by Julien Francois Zbinden, Harald Genzmer and Jan Koetsier. In 2004 he presented three world premieres of pieces of the Czech composer Juraj Filas, whose teacher was a student of Dvorák. Two of them took place on the Beethoven Fest Bonn: The concert for piccolo trumpet and symphony orchestra, with the Beethoven Orchester Bonn, that was characterized as „Music as emotional vehement as Mahler and melodic as beautiful as Puccini“ (Bonner Rundschau) and Filas‘ „Apassionata“ for trumpet and organ.

In the Berlin and Cologne Philharmony, Otto Sauter premiered the trumpet concerto for piccolo trumpet and symphony orchestra, the international renowned Greek composer Mikis Theodorakis wrote for him, in october 2008 (directed by Gert Hof/arrangement Robert Gulya).

Following his motto „Remarkable Music Needs Remarkable Places“, Otto Sauter celebrated the inauguration of the first „Wartburg-Festival“ in May 2004. On the legendary Wartburg – the UNESCO World Cultural Heritage, where Martin Luther translated the bible – he invited good friends and internationally reknowned artists like Lucia Aliberti, Justus Frantz, Klaus Mertens, Matthias Eisenberg, Spanish Brass, The Power of Parsifal, Ten of the Best and many more to join in a fascinating festival.

In July 2005 Otto Sauter inaugurated the first international choir- and music festival „Musica Sacra a Roma“ in Rome and at the Vatican. Because of its symbiosis of masterpieces of arts and culture, the festival became a unique event in the fascinating scenery of the „Eternal City“ of Rome and the Vatican. World stars in music, like the Italian Soprano Lucia Aliberti, the Malmö Symphony Orchestra, the organ players Michael Schönheit and Christian Schmitt and many more, came together with 32 choirs from more than 20 nations in exclusive festival concerts all in Rome‘s most beautiful and important churches, to set a sign for ecumenism and the unifi cation of all nations in the world. Patron of the festival is Cardinal Paul Poupard, President of the Pontifi cium Consilium De Cultura, Vatican.

In 2006 – on the occasion of the 250th birthday of W. A. Mozart – he initiated the „Little Amadeus & Friends Aktionstag“ for German grammar schools together with Peter Will the television producer of the succesful children’s TV series. The cartoon series was awarded with the „Echo Klassik“ for children in 2006. The project under the protectorate of the German Mozart-Society aims at familiarizing children with classical music in an entertaining way. The „Little Amadeus & Friends Aktionstag“ is supported by several important German institutions: Deutscher Musikrat, DOV, BDMV, Deutsche Phonoakademie, VDS, VdM etc. In 2007/8 he started as artistic director the „Little Amadeus Live“ concert series and played 80 concerts in 40 cities in Germany, Austria and Switzerland.

In addition to his work as a soloist, Otto Sauter regularly causes a sensation with his ensemble „Ten of the Best“, which brings ten of the world‘s best trumpeters together under one roof. They regularly go on concert tours in Japan, the USA and Europe. In August 2001 they launched the inauguration of the new Arena AufSchalke in Gelsenkirchen, Germany, with a fanfare especially composed for Europe’s most modern football stadium, in front of 70.000 spectators.

Highlight 2006 under his Artistic Direction was the „Playtime Live City Concert Tour“ during the Football World Championship supported by the Organising Committee FIFA World Cup 2006. The festival took place under the patronage of Dr. Theo Zwanziger (Vicepresident OK FIFA WM 2006) all over Germany and was launched from the FIFA to demonstrate and celebrate the diversity and hospitality of Germany. The festival presented a music selection of the great football continents in 16 concerts (free of charge) in cities like Bremen, Ludwighafen, Trier, on islands like Rügen or Norderney, and at representative public places as well as historic sites like the Sächsische Staatsoper Dresden, Semperoper or the market place in Händel’s hometown Halle. At the festival Otto Sauter presented „Ten of the Best plus one“ that on request of the FIFA was adjusted to 11 players like a football team and „The Power of Parsifal“, an All-Star Team of renowned international jazz musicians, both appearing with the symphony orchestras of the concert cities.