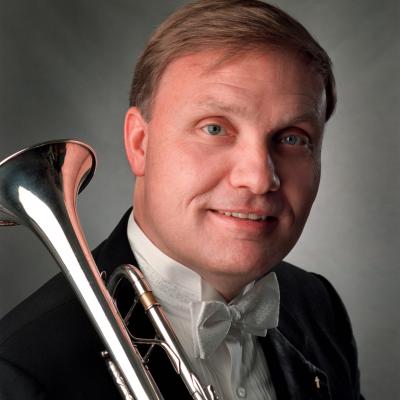 Philip Smith joined the Hugh Hodgson School of Music at the University of Georgia as the William F. and Pamela P. Prokasy Professor in the Arts in August 2014.  In addition to teaching his trumpet studio, he is the Bandmaster of the UGA British Brass Band, member of the faculty Georgia Brass Quintet, and coach of the Bulldog Brass Society.  This new position follows his retirement from the New York Philharmonic after 36 years of service as Principal Trumpet, having joined the New York Philharmonic in October 1978.

Mr. Smith’s father, Derek Smith, a renowned English cornet soloist, provided his early training. He is a graduate of The Juilliard School, having studied with Edward Treutel and William Vacchiano, former Principal Trumpet of the New York Philharmonic.  In January 1975, while still at Juilliard, Sir Georg Solti appointed Mr. Smith to the Chicago Symphony Orchestra.

He has appeared as guest Principal Trumpet with the Orchestre de Paris, conducted by Daniel Barenboim, performing Mahler’s Symphony #5.

Since being at the Hugh Hodgson School of Music, Mr. Smith has on occasion performed as an extra in the trumpet section of the Atlanta Symphony Orchestra during the 2017 – 2019 seasons.

Mr. Smith has appeared as soloist with many symphonic wind ensembles, including the US “President’s Own” Marine Band, the West Point Academy Band, the US Army TRADOC Band, the US Coast Guard Band, La Philharmonie des Vents des Quebec and many major university wind ensembles.  He appeared at The College Band Directors National Association Convention in Austin, Texas, for the world premiere of Turrin’s Chronicles(1999) with the University of New Mexico Wind Ensemble.  A subsequent recording ofChronicleswas produced which included the world premiere of Stephen Gryc’s Evensong(2000) and Turrin’s Fandango(2000).  Alfred Cohen’s …curls of motion…was premiered in 2008 with the Columbus State University Wind Ensemble.  Aaron Kernis’ a Voice, a Messengerwas premiered in 2013 with the University of Illinois Wind Ensemble.

Mr. Smith is now conducting brass bands and brass ensembles.  In 2019, he conducted the Hannaford Street Silver Band and is scheduled to repeat with them in 2020.  He has conducted and hosted the New York Philharmonic Brass and Percussion at their annual “Holiday Brass”concerts in 2014, 2016, 2017 with Doc Severinsen as guest, and 2018 with Bramwell Tovey as guest pianist and composer.  He is scheduled to conduct the 2019 NYP “Holiday Brass.”  In 2018, he repeated the “Holiday Brass”concert with Doc Severinsen and the Charleston Symphony Brass.  In 2017, he conducted the Royal Stockholm Philharmonic Brass and Percussion, performing Elgar Howarth’s brass transcription of Mussorgsky’s Pictures at an Exhibition. He led the UGA British Brass Band to a Third-place Prize in the First Section of the 2017 North American Brass Band Association Championships.  He was guest conductor of the 2016 Summer Course of the National Youth Brass Band of Great Britain.  He also conducted the New York Philharmonic Brass at the Dedication Ceremony of the September 11 Museum in New York City on May 15, 2014.

Mr. Smith has been on the faculty of The Juilliard School and Manhattan School of Music, and has appeared as recitalist and clinician at the Caramoor International Music Festival, Grand Teton Music Festival, Swiss Brass Week, Bremen (Germany) Trumpet Days, Oslo (Norway) Trumpet Week, Harmony Ridge (Vermont) Festival, Scotia Festival of Music and numerous International Trumpet Guild conferences, including the 2018 ITG in San Antonio.  He has taught, and performed at the Le Domaine Forget International Music Academy (2015, 2018) in Quebec, Canada, the Blekinge International Brass Academy BIBA (2015) in Karlskrona, Sweden, and the MasterWorks Festival (2015, 2016).

In 2005, Mr. Smith was made an Honorary Member of the Royal Academy of Music (Hon RAM) in London, England.  In 2006, Mr. Smith was given the International Trumpet Guild Honorary Award.

As a member of the Principal Brass Quintet, Mr. Smith has toured Japan four times, as well as Brazil and Germany.  He has also performed and recorded with the Canadian Brass, Empire Brass, Chamber Music Society of Lincoln Center, Bargemusic, and New York Virtuosi Chamber Symphony.

Mr. Smith’s latest recording (2017) is Trilogy, a three CD set, featuring re-releases of his first LP entitled Trumpet & Piano, and his Escapaderecording with GUS Band.  The third CD of this set is a new release entitled Hymns: The Unreleased Tracks.  Upon his retirement in 2014, the New York Philharmonic produced The Philip Smith Collection, an archival three-volume set of live recordings of many of his solo trumpet performances, and live orchestral excerpts from his tenure with the NYP. Other recordings include Contest Solosproduced by the International Trumpet Guild; Fandango, featuring New York Philharmonic Principal Trombonist Joseph Alessi and the University of New Mexico Wind Symphony (Summit); My Song of Songswith the New York Staff Band of The Salvation Army (Triumphonic); Copland’s Quiet City(Deutsche Grammophon); New York Legends(CALA); Orchestral Excerpts for Trumpet  (Summit); Ellen Taaffe Zwilich’s Concerto for Trumpet and Five Instruments (New World); Bach’s BrandenburgConcerto No. 2(Koch); Walton’s Façade (Arabesque); and The Trump Shall Resoundand Repeat the Sounding Joy(Heritage).