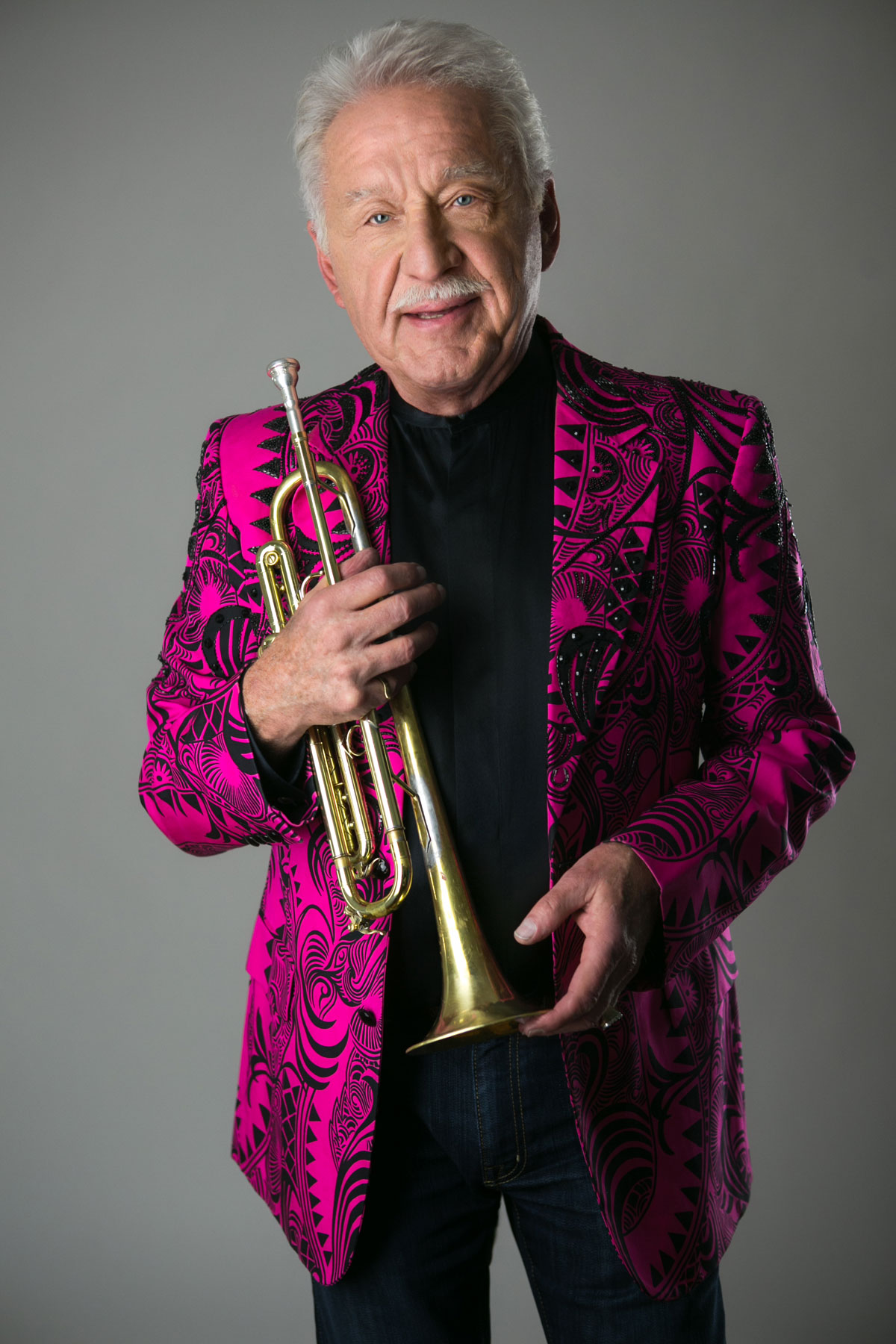 Heeeeere’s Johnny!” That lead-in, followed by a big band trumpet blast, was the landmark of late night television for three decades. The ‘Johnny’ was Johnny Carson, the announcer was Ed McMahon and the bandleader was Doc Severinsen. Beginning in October 1962, The Tonight Show with Johnny Carson ruled the night air for thirty years. On May 22, 1992, it came to an end…

Within a week of the final telecast, Doc Severinsen and His Big Band were on the road, and to this day, audiences across America love and respect Doc and his big band, not just because he shared their living room with them for so many years, but because of Doc’s love of the Big Band repertoire.  His musicianship keeps this iconic American music fresh to this day. Their repertoire includes Ellington and Basie standards, pop, jazz, ballads, big band classics and, of course, The Tonight Show theme.  Severinsen can still blow hard with his horn, and hit the high notes, a result of his continued commitment to the practice studio and the refinement of his craft. But as a band leader, Doc continues to surround himself with the best in the business, and he’s only too happy to give them a turn in the spotlight.

A Grammy award winner, Doc has made more than 30 albums–from big band to jazz-fusion to classical. Two critically acclaimed Telarc CDs with the Cincinnati Pops Orchestra showcase his multifaceted talents from Bach to ballads.  The Very Best of Doc Severinsen reprises fifteen of Doc’s signature pieces. His other recordings include Unforgettably Doc with the Cincinnati Pops on Telarc, and the Grammy nominated Once More With Feeling on Amherst. He received a Grammy Award for “Best Jazz instrumental Performance – Big Band” for his recording of Doc Severinsen and The Tonight Show Band-Volume I.

In 2006, Doc moved to San Miguel de Allende, in Mexico, ostensibly to retire from performance. Within weeks, he was jamming with the magnificent guitarist Gil Gutierrez.  He now tours regularly with Gil in a quintet called The San Miguel Five, performing a mix of Latin and Gypsy jazz and standards, to exceptional acclaim. They just released their most current CD, Oblivion, in January 2014.

Severinsen’s accomplishments began in his hometown of Arlington, Oregon, population: 600. Carl H Severinsen was born on July 7th, 1927, and was nicknamed “Little Doc” after his father, Dr. Carl Severinsen a dentist. Little Doc had originally wanted to play the trombone. But Doc Sr., a gifted amateur violinist, urged him to follow in his father’s footsteps. The Doc Jr. insisted on the trombone, which turned out to be unavailable in tiny Arlington’s music store.  And so, a trumpet it would be. A week later, with the help of his father and a manual of instructions, the seven-year-old was so good that he was invited to join the high school band. At the age of twelve, Little Doc won the Music Educator’s National Contest and, while still in high school, was hired to go on the road with the famous Ted Fio Rito Orchestra.  However, his stay with the group was cut short by the draft. He served in the Army during World War II and following his discharge, landed a spot with the Charlie Barnett Band. When this band broke up, Severinsen toured with the Tommy Dorsey, then, the Benny Goodman bands in the late 40’s.

After his days with Barnett and Dorsey, Doc arrived in New York City in 1949 to become a staff musician for NBC. After years of playing with NBC’s many studio bands, Doc was invited to play a gig in the highly respected Tonight Show Band.  The band leader at the time, Skitch Henderson, asked him to join that band in 1962 in the first trumpet chair. Five years later, Doc became the Music Director for The Tonight Show and the rest is history.  His loyalty to Johnny Carson and Ed McMahon never faltered, and the warm camaraderie between the three was an enormous part of the show’s success.  When Johnny decided to retire from The Tonight Show, Doc and Ed said their goodbyes as well.  Of course, free from the nightly grind of the TV studio, Doc Severinsen had far more time to expand his musical horizons and continues to keep an extensive touring schedule.

In addition to his San Miguel 5 appearances, Doc tours regularly with his own Big Band and continues to perform with symphony orchestras all over the country.  Over the years has been Principal Pops Conductor with the Phoenix Symphony, the Milwaukee Symphony, the Minnesota Orchestra, the Colorado Symphony, the Pacific Symphony and the Buffalo Philharmonic.

Doc performs on a S.E. Shires Severinsen Destino III, a trumpet he developed with Steve Shires and the S.E. Shires Company in Massachusetts.  The factory has 25 craftsmen who are professional, working brass players and totally understand what is involved in making great brass instruments.  The S.E. Shires Company features a line of trumpets that includes the S.E. Shires Severinsen Destino III which was developed through Doc’s supervision until his exacting standards of quality and sound were achieved.  Doc continues to make regular visits to the factory.

Today, Doc has not lost his flair for the outrageous fashion statement or his trademark wit. But his gregarious nature has never interfered with the fact that he has been one of the greatest trumpeters and musicians of the last 60 years, respected in the worlds of classical music, jazz, big band, and now even world music.  In the end, Doc Severinsen has transcended his celebrity, and rejoiced in his remarkable ability to simply play his trumpet as well as he can.  Which has proven to be good enough for the millions of people who count themselves his fans.