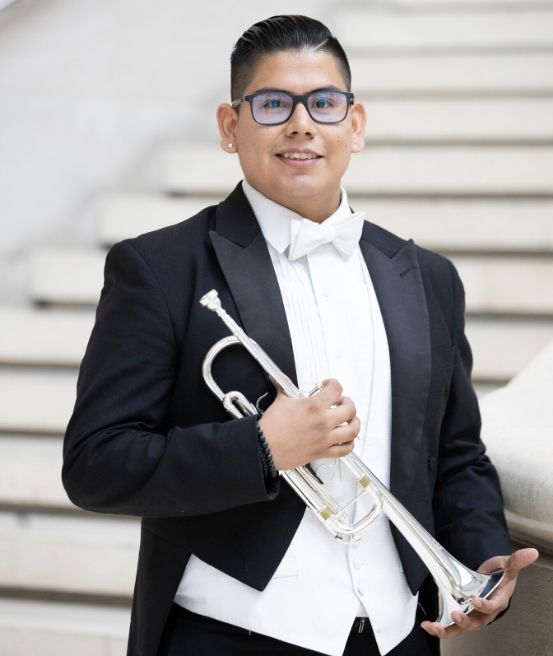 A native of Lima, Peru, Elmer Churampi began playing the trumpet when he was four years old with his father who is also a trumpet player that plays on street bands. Elmer was invited to be part of the National Youth Orchestra of Peru when he was seven years old and was a soloist three times with the National Symphony of Peru at the ages of 7, 8 and 9 performing Carnaval de Venecia, the Haydn Trumpet Concerto and the Arutunian Trumpet Concerto. When he was 10 years old, he was accepted to the National Conservatory of Music from Peru. Elmer was invited to be part of the professional orchestra of the Conservatory of Peru as a second trumpet when he was 12. At the age of 13, he played concerts with the Orquesta de los Reyes, the Opera Orchestra from Peru.

In 2010 he attended the Interlochen Summer Camp with a full scholarship, playing first trumpet in every concert. Elmer was accepted to the Interlochen Arts Academy with a full scholarship and studied for three years with Ken Larson. During that time, Elmer won competitions including Young Artist in 2013, Jack Kent Cooke Award in 2013 and the Interlochen Young Artist Award in 2013. Elmer was also interviewed and featured on the radio program From the Top. He was invited by Mark Gould and Jen Lindemann to perform at the Banff Center of Arts in the brass festival in 2013. During his freshman year, Elmer won the concerto competition at New England Conservatory as well as the MTNA brass competition in Chicago. In 2015 and 2016, Elmer won first place in the National Trumpet Competition in the undergraduate division. He also won the Young Artist brass award in Texas.