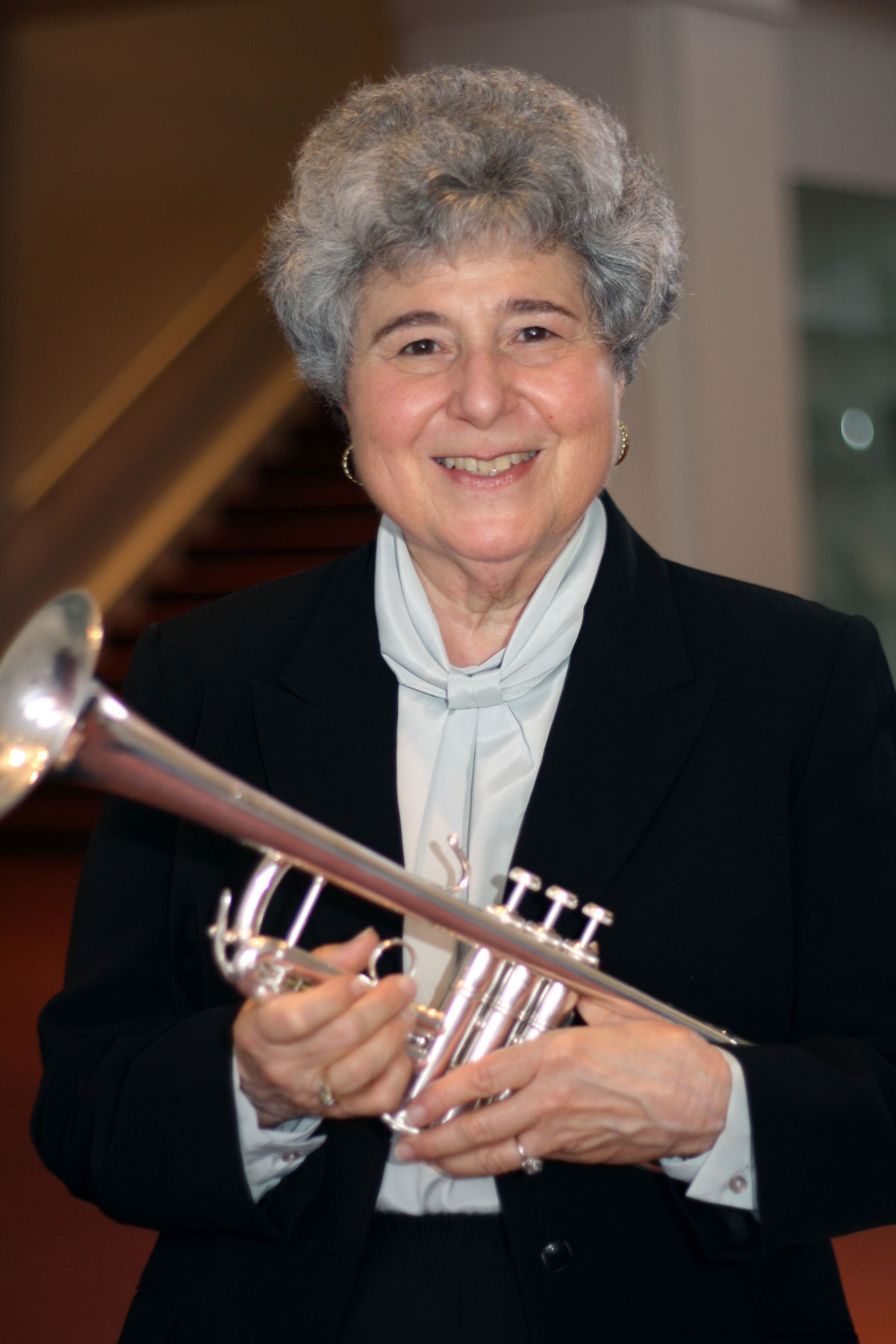 Marie Speziale, Professor Emerita of Trumpet and Chair of the Brass Department at the Shepherd School of Music at Rice University, is acknowledged as the first woman trumpeter in a major symphony orchestra.  Ms. Speziale retired in 1996 after having served as Associate Principal Trumpet of the Cincinnati Symphony for thirty-two years (1964-1996). A graduate of the College-Conservatory of Music in Cincinnati, Ms. Speziale studied with Robert Price, Robert Braunagel, Eugene Blee and Arnold Jacobs.

Since retiring from the orchestra, she has remained active as a performer, teacher and clinician. She served as Visiting Principal, Associate Principal and Second Trumpet of the St. Louis Symphony Orchestra, including their European tour, Carnegie Hall concerts and recordings.   She toured with DIVA (the women’s jazz band) and the Florida Symphony Orchestra.   She has also performed with the Colorado Symphony Orchestra and the Louisiana Philharmonic.  She performed with the Monarch Brass Quintet and Monarch Brass Ensemble, which she also conducted at the 1997 and 2014 International Women’s Brass Conferences, and at the 2015 ITG Conference.   She recorded for the Star Trek TV Series: Voyager and Deep Space Nine, at Paramount and 20th Century Fox studios.  In 1999, she was one of six Americans (and the only American woman among the Americans) to be invited by the Tokyo International Music Festival to perform in its first Super World Orchestra.

Ms. Speziale has been an active participant in numerous conferences and leader of master classes in Europe, Asia and throughout the United States.  She was a featured guest artist at the 1993, 1997, 2000, 2003, 2010, 2014 and 2019 International Women’s Brass Conferences and the 1998, 1999, 2001, 2014, 2015, 2017 and 2018 International Trumpet Guild Conferences. She has served as artist faculty at the 1998, 1999 and 2000 Summit Brass Mendez Institute, performing with Summit Brass, coaching ensembles, presenting master classes and conducting brass orchestral repertoire reading sessions. She has adjudicated the Fischoff National Chamber Music, the International Women’s Brass Conference, International Trumpet Guild, Interlochen Concerto and National Trumpet Competitions.

From 1979 to 2002 she was Adjunct Associate Professor at the University of Cincinnati College-Conservatory of Music, and was Professor of Music at Indiana University from 1999 to 2002.   In 2001, she was appointed Professor of Trumpet and Brass Department Chair at the prestigious Shepherd School of Music at Rice University.   While at Rice, she conducted the Rice Brass Choir, performed regularly with the Houston Grand Opera and frequently with the Houston Symphony Orchestra, Houston Ballet Orchestra and Houston Pops.

She has been a brass coach at the New World Symphony, serving on the audition adversity training panel and conducting their brass ensemble in concert.  She served on the faculty of the University of Cincinnati College-Conservatory of Music’s Opera Theatre and Music Festival both in Lucca, Italy and Spoleto, Italy, where she conducted the brass choir, taught brass orchestral repertoire classes and served as brass chamber music coach.   She has coached and conducted the brass sections of Washington, DC’s premiere bands …. the US Air Force Band, US Air Force Ceremonial Brass and the US Army Field Band.    A member of the faculty at the Round Top Festival Institute since 2011, she conducts their Brass Ensemble every summer.

From 2014-2016, Ms. Speziale supervised the graduate brass chamber music program at Indiana University’s Jacobs School of Music. In 2016, she was invited by the Midwest Board of Directors to present a master class at their 70th Anniversary Conference.  In 2017, she travelled to Uruguay to conduct the Banda Sinfonica de Montevideo in concerts commemorating Women’s History Month.    In 2017, Ms. Speziale served as Visiting Professor of Trumpet at the Indiana University Jacobs School of Music, and in 2018 at the Butler School of Music at The University of Texas at Austin. In 2018 she was presented with the prestigious Honorary Award from the International Trumpet Guild.   In 2019, Ms. Speziale was one of 100 women recognized by Cincinnati Arts Wave in their Celebration of Women in the Arts: Power of Her.